The term drug trafficking is used loosely to define any act of distributing, selling, possessing, or movement of drugs. Typically speaking, drug trafficking involves large amounts of drugs that are intended to be distributed amongst several individuals for sale. However, even individuals who possess small amounts of controlled or illegal substances, such as cocaine or heroin, can be in violation of one of California’s health and safety codes. Drug trafficking and abuse are directly related to health concerns like addiction, and they also play an important role in certain types of sex crimes. 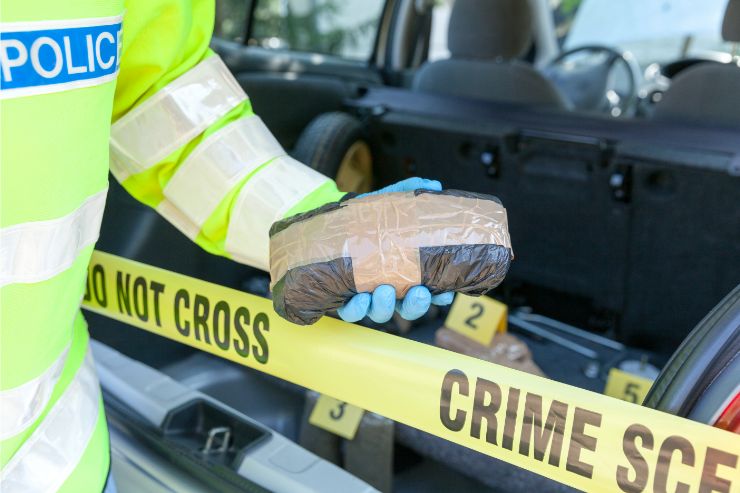 The Seriousness of Drug Trafficking

Drug trafficking,or drug possession, without a written prescription,is a serious crime with heavy punishments for any individuals who are caught. Due to the state’s proximity to international borders such as Mexico and Canada, measures to prevent drug trafficking are heavily funded, and authorities are aggressive in their search for persons involved in this practice, which may sometimes result in the entrapment of innocents.

What Does It Mean to Be Convicted as a Drug Trafficker?

Being convicted as a drug trafficker is a felony charge that does not leave your public record, even after your sentence has ended. Individuals who are marked as drug traffickers could face denial from leasing a home or renting an apartment, the refusal for employment despite qualifications, inability to take out loans or open credit cards, a ban from owning a firearm for ten years, being denied custody rights to your children, refusal of citizenship for non-Americans, denial of federal aid, and life-long damage to public image within a community.

California Health and Safety Code 11352 makes it illegal to move or sell any of the following controlled substances:

For example, a college student who sells his prescription of Adder all to another student to help them study for an exam is in violation of health code 11352.

How Is Transportation of a Controlled Substance Classified?

You may be classified as transporting a controlled substance no matter where you are taking it. Distance does not matter, nor does the mode of transportation. You could still be in violation of health code 11352 even if you walked the drug over to a neighbor’s house or rode a bicycle with the drug in your backpack.

The court must also prove that the drug was being transported with the intention of sale even if you were not the person who would be selling the drug.

How Is the Sale of a Controlled Substance Classified?

Selling a controlled substance refers to agreeing to sell for money or giving away a controlled substance to another person. Even if you are not the one who may be transporting the substance or handling the sale, if you have agreed to allow someone else to obtain the drug and the agreement went through, you are in violation of health code 11352.

What Are Some of the Punishments for Violating Health and Safety Code 11352?

There are varying degrees of extremity for drug crimes. The role you play in the sale of a drug, the amount of the drug being sold, and the age of the person the drug is sold to can all play into the severity of the punishment.

Additional factors such as selling to a minor, a pregnant woman, or a disabled individual, selling or transporting drugs such as heroin and cocaine, selling near a rehabilitation or treatment center, and transporting or selling large quantities can result in additional penalties.

Multiple-time offenders can face life in prison, especially if international borders were crossed or a drug sale resulted in a death or injury.

Why Having an Experienced Drug Trafficking Attorney Can Help Your Case

Having an experienced and knowledgeable attorney can help significantly reduce your sentence, saving you thousands of dollars and possibly years of jailtime or probation. In the case of innocents, having an attorney could be what saves them from wrongful accusations and a felony charge that could forever impact their future.

In many cases, a drug trafficking lawyer can work to protect your rights by finding evidence to prove an unlawful search of your home or vehicle. If authorities do not have probable cause or an official search warrant to search your person, your home, or your vehicle for drugs, they could be in violation of the Fourth US Constitutional Amendment: protecting citizens from illegal search and procedures by members of law enforcement.

Additionally, if a lawyer can prove that an individual had the right to possess the drug, was an innocent bystander in a drug trafficking incident, or lacked awareness that they were in possession of the drug, these could be other potential reasons for the court to drop the charges.

Without the help of an experienced attorney, an individual may not be able to prove their innocence on their own. A drug trafficking lawyer understands the intricacies of the law and can navigate through obstacles that may arise in your unique case, saving you the need to face the harsh rulings of the court on your own.

Can you get probation for drug trafficking?

It is highly possible that after serving jailtime, the court may also require you to complete formal probation at your own expense. Typically, this can range from 1-3 years.

If the court rules your charge to be a misdemeanor rather than a felony, probation may be given over jailtime, but you should be aware that violating your probation could land you in jail and give you additional punishments.

What is the penalty for drug trafficking in California?

There are multiple health and safety codes that handle drug trafficking in California. Health and Safety Code 11352 handles moving or selling controlled substances such as LSD and cocaine. A violation of this code is considered a felony and could result in 3-9 years in jail.

Health code 11360 involves the sale and transportation of marijuana, and its violation could result in 2-4 years of jailtime.

How many grams is trafficking?

What is considered trafficking?

Drug trafficking refers to the movement of controlled substances and illegal drugs with the intention of sale to another individual. The amount of the drug must be usable and will not violate this law if it is only remnants.

Transporting a drug can refer to any type of movement, including by automobile, airplane, train, bicycle, and foot. Even if you are not the seller but merely the carrier, you can still be charged with drug trafficking.

The Law Offices of Henry Salcido Can Help

If you are a resident of Long Beach and have been charged with drug trafficking, contact a Long Beach Lawyer straightaway to get the assistance you deserve.

The Law Offices of Henry Salcido are a Long Beach criminal defense team that strives to assist you in every way possible. With decades of combined experience, Henry Salcido and their team are well-respected lawyers who work diligently with their clients to get them proper representation in numerous criminal law cases. Contact our team today, and learn more about how our skilled attorneys can assist you in a drug trafficking legal situation.